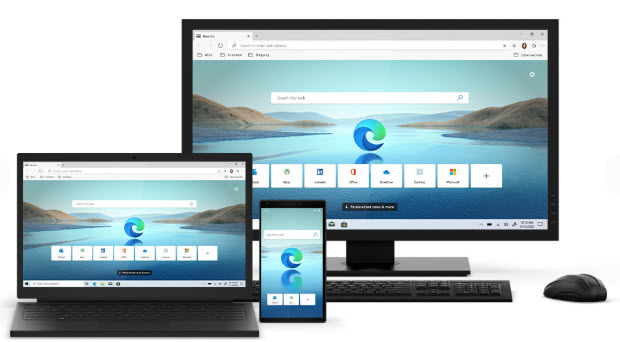 Microsoft has released its new version of the Edge browser – based on Chromium, Google’s open-source project that provides much of the code base for Google’s own Chrome browser.

The latest version of Edge joins a family of browsers based on Chromium, including Brave, Blisk, Chrome, Colibri, Epic and Opera.

So what’s the big deal about another browser?

Well, mostly it is because it’s Microsoft and that matters – especially for a lot of business users.

Microsoft is trying to make the online experience with Microsoft 365, Edge and Bing a seamless environment for the end user where public content and private organisation content appear in the same browser environment.

This could produce a better experience for end-users and we’re sure Microsoft will be hoping it will drive more cloud adoption, but there will be challenges for IT admins and CSOs.

We’ve been using the Beta and Developer builds of the new Microsoft Edge browser for several months now, so here’s the deal on the new Edge…

The Edge browser looks a lot like Google Chrome

This might be down the Chromium code on which it is based, or maybe Microsoft doesn’t want you to notice the difference when Edge is configured as your default browser. Either way, if you are a Google Chrome user, you might have to check the logo in your taskbar to remind you which browser you are using.

If you are switching from Google Chrome to Microsoft Edge, the user experience is very similar and there won’t be much of a learning curve.

You could comfortably roll this out to users and most wouldn’t even notice.

One of the big disadvantages of the old version of Edge was the lack of support for extensions. While Microsoft touted this as a security feature, for many users Chrome extensions are a real productivity booster, so not having your favourite extensions available was a deal-breaker.

So far, all the extensions we have added – either from the Microsoft Store or the Chrome Web Store – have worked without problems. Of course, overloading on extensions is a great way to use up memory for your browser instances, so we recommend keeping extensions to a minimum. Typically we would use OneNote, OneTab, Flipboard, Grammarly and Nimble CRM, with users adding two or three others to help with their specific role.

This may not be a big deal for most users, but anyone who works across multiple Office 365 tenancies will know what a pain it was working with InPrivate sessions to log on to clients’ tenancies and the hassle of not having your ‘normal’ extensions and bookmarks available.

With the new Edge browser, you can configure separate profiles for each tenancy – entering login credentials and even importing bookmarks, saved passwords etc., from another browser.

You can soon have several profiles configured, each with a bespoke set of bookmarks and settings and now you can easily switch between them.

You can choose whether to sync profile settings across devices.

This will be a popular feature with SharePoint developers, support technicians, consultants and anyone who needs to switch between Office 365 Tenancies or between user accounts with different security levels and permissions.

This is also a great way to separate your work and personal activity online.

Collections – the killer feature in the new Edge browser

If there is one feature that will convince information workers to switch to the Edge browser, it is Collections.

Collections is a simple concept that allows you to easily ‘collect’ websites together to help organise your work online. There are so many practical use cases for this concept that you will be surprised how much time it saves and how much more productive you are.

You are researching a topic – just create a new collection and add relevant websites as you come across them. These can be exported to a Word or Excel file, or just pasted into an Outlook Email to share with colleagues.

You are tracking clients (or competitors) online – create a collection to accommodate their online footprint – News Search, Website, Facebook, Twitter, Financials, LinkedIn, etc. Open all the pages at once and quickly update yourself on any relevant news.

There are a number of industry news sources that you have to keep across. Simply create and maintain a collection of the best news websites in your sector. When you have time allocated for your regular catchup, simply open all the sites in the collection and quickly scan through for items of interest.

With many of us using cloud resources like Microsoft 365 or Google’s G Suite, enterprise resources like SharePoint sites, document libraries, Teams sites and Yammer feeds all have web addresses and can be included in a collection. This is a great timesaver for managing projects – all your internal and external resources can be held in a Microsoft Edge collection for easy access.

If your job involves spending a lot of time online, Collections alone is a good enough reason to switch to Microsoft Edge – try it, you won’t be disappointed!

Microsoft Edge Browser – Where to get it

The new chromium-based Edge browser is now included in Windows updates, so you should already be able to find it among the apps in your START menu.

If you can’t find it on your machine, you can download the latest version for Windows here.

You can find out about upcoming features on the Microsoft Edge What’s Next Page.

If you are really keen to take advantage of new features before they go on general release, you can download pre-release versions from the Edge Insider Channels Page.

Here you’ll be able to download the Beta, Developer or (for the brave) the Canary versions.

The Canary Channel is a daily update of what the developers are working on right now, so don’t expect it to be super stable – and features you see here may not ever make it into productions. You won’t want to be using this on a production machine.

The Developer Channel will be more stable than Canary and will give you a good idea of what newer editions of production versions will look like.

The Beta Channel updates around every six weeks and you can expect this to be pretty stable with any bugs from Canary and Developer channels fixed.

Unless you are a developer or are desperate to get hold of a new features as soon as possible, best to stick to the regular releases that will be included with Windows Update.

If you haven’t yet tried the chromium-based version of Microsoft’s Edge browser, take it for a spin. The ease with which you can switch profiles and the collections feature make it stand out from the competition.

If you have Office 365 or G-Suite or Zoho One, you probably aren’t taking full advantage of the capabilities you are already paying for. The technology available to even the smallest organisations today is incredible – but few companies (whatever their size) are taking full advantage.

If you want to find out more about how you could improve your business processes and make everyone more productive without working any harder, fill in the form below and we’ll get right back to you.