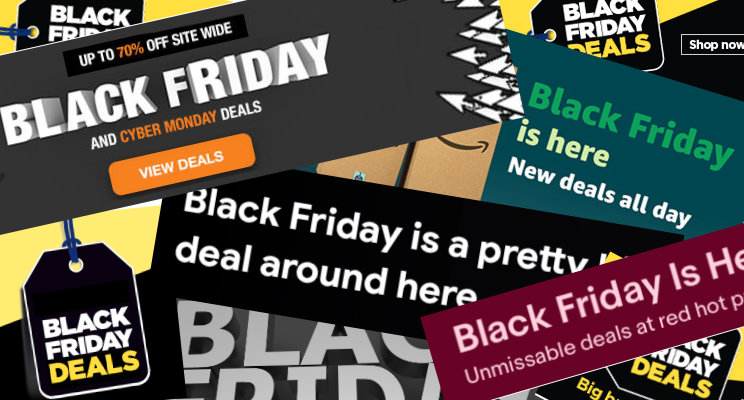 Black Friday – Not Just for Consumers

Black Friday used to be the day after Thanksgiving, but for the retail world it has extended on both sides of the calendar and many ‘Black Friday’ sales started over a week ago and will run through the weekend, into Cyber Monday and beyond.

If you work in retail, you’ll have been planning your ‘Golden Quarter’ campaigns for months and you’ll be knee-deep (or hopefully ‘up to your neck’) in Black Friday sales by now!

However, while most see ‘Black Friday’ as a consumer event, we see lots of opportunities for businesses large and small to take advantage of ‘Black Friday’ to make the budget stretch a bit further.

E-commerce, cloud computing and Software-as-a-Service (SaaS) completely changed the landscape for consumers and businesses; events like Black Friday no longer involve queuing outside and mortar store to flood in at opening time and fight over a flat screen TV that you would take home on the bus.

Pretty much everything is available online these days and you can shop from the comfort of your office with your purchases arriving next day – probably with a timed delivery and a tracked courier service.

The disruption of E-commerce has destroyed traditional distribution channels for many goods – especially IT products. You no longer go to a traditional reseller or VAR for a quote for hardware purchases; you’ll likely buy from an online distributor/reseller or if the quantities are large enough, direct from the vendor.

When purchasing software licenses, unless you have complex requirements (or your vendor has an extremely complex licensing model!) you will almost certainly be dealing directly with the vendor online rather than a third party.

There are many factors that have influenced the purchasing environment for businesses, but some of the main ones are:

Whatever the reasons, businesses can benefit from consumer events like Black Friday – if you follow some simple rules…

The first key to making any business purchases at this time of year is to forget the hype and plan your purchasing – just like you would through the rest of the year. There’s no point in getting a deal on something you don’t need or weren’t planning to buy anyway.

Next, ignore the “Flash Sales” – those one-off headline offers with massive discounts. If you see a Microsoft Surface Pro for £50 going on sale at midnight, I can guarantee you’ll be wasting your time. In the consumer world, Flash Sales generate interest around launches and other marketing events and even when they are criticised – as in the recent case with Xiaomi’s £1 smartphones offer – you still get extra media coverage to get your brand name out there, so I guess marketers would class that as a ‘win’. However, from a business purchasing viewpoint, you might as well buy a lottery ticket.

Don’t expect to buy large quantities. If you need 100 Lenovo or HP laptops of a particular model and spec, you won’t get a deal on a sale event. Many of the best deals will be limited, some to just ‘one per customer’. If they do let you order 100, you’re probably not getting as good a deal as you thought!

With those caveats in place, what are the best deals for businesses to look for on Black Friday?

What are the Best Black Friday Business Buys

Here are the kind of products you’ll get good deals on over the Black Friday period:

Laptops – small quantities of decent spec machines for reps, field engineers and the like. Cheap laptops are good for standard users like sales reps where machines might get knocked about a bit and occasionally broken or stolen. It can be worth having a couple of replacement spares on hand so you don’t have to make an emergency replacement purchase over the coming months.

At the other end of the spectrum, Black Friday can be a good time to get that fancy lightweight (and expensive) design statement of a notebook that will keep the CEO’s EA happy. Amazon, eBuyer, Currys/PC World & Argos all have a selection of good deals on laptops from the leading manufacturers.

Kindles – If you think of the Amazon Kindle Fire as a tablet where you control the content rather than an as a simple eBook reader you’ll see that it represents great value. There’s nothing on the market that comes close to the spec at this price. That’s because Amazon doesn’t need to make money on the Kindle Fire – they figure on making a profit on the content you will purchase over time.

There are some great business use cases for the Kindle Fire in the workplace or out in the field. For example, if you have field service and support agents a Kindle Fire is a great place for service manuals, checklists and technical content – all pushed to the Kindle from the office, so you know everyone has the most up to date versions. For sales reps, a Kindle Fire could contain product manuals, sales pitches and presentations. You could also push great sales and motivational books to the sales’ team kindles to help them become better at their craft.

An Amazon Kindle Fire tablet is a great tool for using at trade shows; these devices aren’t connected to your network and you can wipe and disconnect from your Amazon account if one is lost or stolen.

If you regularly onboard new members of staff, a Kindle Fire can be a repository of training material, company and industry information, policies and procedures etc. A great tool for a new starter to get up to speed quickly.

If you are buying for business, don’t forget to pay the extra tenner for the ‘no special offers’ version!

Developer PCs – You’ll want your to have powerful computers. That makes their job easier and makes more effective use of their time. Good developers don’t come cheap, so you don’t want them twiddling their thumbs while backups run, new images load and code , VMs spin up and whatever else they get up to.

You also want your developers to be happy (well, as happy as they can be!) and one way to trigger a serotonin rush is to make sure they have the fastest kit in the office.

The fastest PCs you can get are typically called ‘workstations’ for business purposes, but they share the same characteristics (fast processor, lots of memory, fancy graphics card) as ‘gaming machines’ in the consumer world. Keep an eye out for gaming machine deals during the sales and you’ll have some happy campers in Dev Ops!

Check out the gaming PC and Laptop deals on eBuyer.

SaaS Software – if you have any subscription software, check the deals on the vendor website. Software-as-a-Service (SaaS) companies tend to run Black Friday deals (because that’s what their marketers tell them to do) and there will often be big discounts on subs. If your subscription isn’t up for renewal right now, ask the vendor for a deal if you renew now.

The beauty of purchasing a SaaS subscription now is that come renewal time next year, it will be Black Friday again and you’ll probably get another deal. If you have designers in-house, Adobe’s 39% off their Creative Cloud subscription packages could save you over £100 per seat over the coming year if you subscribe to the Business Bundle.

Desktop Software – if you have ‘old fashioned’ software that you actually install on your PC or laptop, there are deals to be had. Anti-Virus and Internet Security software is a classic example.

Large corporates will likely have site license deal in place for this kind of thing or maybe endpoint security provision in place that means you don’t need this kind of protection on the desktop, but many businesses will still be paying per seat licenses. If you have lots of users to manage, you’ll likely want something with install and update features, but smaller businesses can take advantage of some great deals over the next few days.

You wouldn’t normally think of Groupon as a tech supplier, but they have some great Black Friday deals on McAfee, Norton and AVG virus products, including a McAfee Internet Security 10-device license for just £8.99. A small business with 40 devices to protect that was paying £25 per user per year for anti-virus software could save almost £1000 over the coming year.

That could go towards paying for the Xmas party – or some extra marketing, or a couple of new PCs.

Smartphones – if you have lots of users, you probably have a deal with one of the mobile networks, but there are still a number of reasons you might want to pick up some handsets while deals are on.

For example, you might want a couple of SIM free spares for when smartphones get broken, lost or stolen. Or you might want to give new employees a PAYG account until you know they are going to make the grade rather than putting them straight onto a long-term contract. You might want some dual SIM handsets for international travellers.

Amazon has some of the best SIM-free deals, including exclusives on some Motorola models and the new Xiaomi range.

Other ideas for businesses to take advantage of Black Friday offers:

Where to find the Best Black Friday Deals

Currys/PC World Business site has a ‘Black Tag’ event running with some good deals on laptops, monitors and printers.

Ebuyer is generally always a competitive option among the tech resellers, and their Black Friday business event also has some attractive deals.

Amazon itself is going after more of the business market with its Amazon Business account. This will give you buying groups, approval controls, spending limits, customised spending reports and integration with existing procurement systems like Coupa, and SAP Ariba.