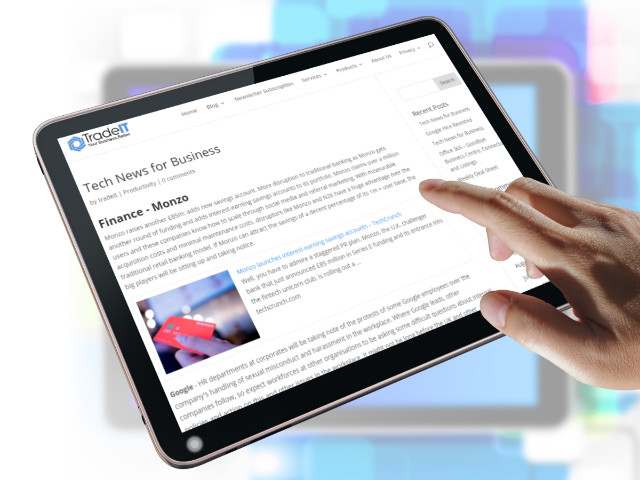 Monzo raises another £85m; adds new savings account. More disruption to traditional banking as Monzo gets another round of funding and adds interest-earning savings accounts to its portfolio. Monzo claims over a million users and these companies know how to scale through social media and referral marketing. With measurable acquisition costs and minimal maintenance costs, disruptors like Monzo and N26 have a huge advantage over the traditional retail banking model. If Monzo can attract the savings of a decent percentage of its 1m + user base, the big players will be sitting up and taking notice.

HR departments at corporates will be taking note of the protests of some Google employees over the company’s handling of sexual misconduct and harassment in the workplace. Where Google leads, other companies follow, so expect workforces at other organisations to be asking some difficult questions about internal policies and action on this and other issues in the workplace. It might not be long before the UK and other countries adopt a German-style governance model with worker representation at board level.

If you have a Google account (and if you use any of Google’s services like Gmail or YouTube or if you have an Android phone, you probably do) you should have a look at what Google knows about your activity. Follow the link and you might be surprised how much data is there. If you allow location tracking (as many of us do) you might find this a convenient way to remind you of where you’ve been and what you’ve been up to online. If you aren’t comfortable with this kind of thing, you can configure your privacy settings to adjust the amount of data that is collected, but then you might not be able to find where you parked your car or get recommendations on where to have lunch!

Webmasters will be interested to read about Google’s new version of reCAPTCHA – those annoying popups asking you to click on all the photos with traffic lights or to enter an indecipherable jumble of letters. What’s interesting about this is that it’s a bit more intelligent – so presumably real users will be interrupted less frequently, which is a good thing. However, it also suggests an increase in the activity of bots, which is a bad thing. Anyway, you may well want to use this on your website, which of course will mean more data for Google to work with!

Autosave might sound like a good thing – automatically saving your work means you don’t have to remember to click on SAVE or hit CTRL-S. You might have noticed Autosave appearing at the top of documents, spreadsheets and presentations that are saved on OneDrive or SharePoint. While this means there is less likelihood of users forgetting to save changes, it does mean a bit of re-education as to how people work. The common scenario of opening one spreadsheet and clearing the data to use as the basis for a new one will now cause problems.

With Autosave, if you open your ‘template’ spreadsheet and clear all the data, it will have saved your changes before you get around to doing a SAVE AS and renaming the file, so the original file will be empty. Now users will have to open a file and get into the habit of doing a SAVE AS immediately before making any amendments. Of course, version control should mean that data will be recoverable in any case (if it is spotted in time), but we expect this change in behaviour to cause a bit of confusion – and some data loss, so make sure your users know about Autosave and this required change in behaviour.

GDPR – Still have concerns about your ‘Lawful Basis’?

We’re sure pretty much everyone has their GDPR compliance sorted by now, but for those still concerned about the ‘lawful basis’ for processing personal data, the Information Commissioners’ Office has issued updated guidance on using ‘Legitimate Interest’. If you read the guidance, you should have some clarity over whether ‘Legitimate Interest’ covers your processing of personal data. If not, you should seek professional help!