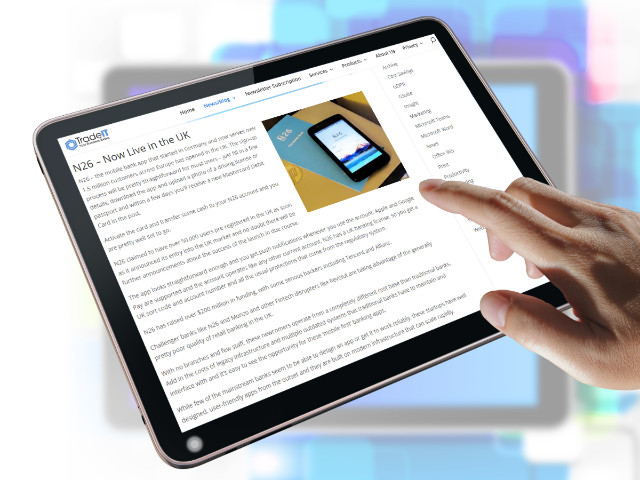 N26 – the mobile bank app that started in Germany and now serves over 1.5 million customers across Europe has opened in the UK. The sign-up process will be pretty straightforward for most users – just fill in a few details, download the app and upload a photo of a driving license or passport and within a few days you’ll receive a new Mastercard Debit Card in the post.

Activate the card and transfer some cash to your N26 account and you are pretty well set to go.

N26 claimed to have over 50,000 users pre-registered in the UK as soon as it announced its entry into the UK market and no doubt there will be further announcements about the success of the launch in due course.

The app looks straightforward enough and you get push notifications whenever you use the account. Apple and Google Pay are supported and the account operates like any other current account. N26 has a UK banking license, so you get a UK sort code and account number and all the usual protections that come from the regulatory system.

N26 has raised over $200 million in funding, with some serious backers including Tencent and Allianz.

Challenger banks like N26 and Monzo and other Fintech disrupters like Revolut are taking advantage of the generally pretty poor quality of retail banking in the UK.

With no branches and few staff, these newcomers operate from a completely different cost base than traditional banks. Add in the costs of legacy infrastructure and multiple outdated systems that traditional banks have to maintain and interface with and it’s easy to see the opportunity for these ‘mobile first’ banking apps.

While few of the mainstream banks seem to be able to design an app or get it to work reliably, these startups have well designed, user-friendly apps from the outset and they are built on modern infrastructure that can scale rapidly.

The big retail banks will have to up their game (or go shopping for startups!) or prepare to see their market share diminish as the challengers first establish a foothold in simple current accounts then expand their offerings to other financial products and services.

One significant driver is that these newcomers have customers who actually appear to like their brand. As long as they manage to maintain solid product offerings and good customer service, it’s easy to see lots of growth for the likes of N26, Monzo, Starling and the rest.

Let’s face it, you won’t find many ‘fans’ posting on the social media sites of Barclays, Lloyds, HSBC, RBS or TSB!

Sticking with the FinTech theme, Monzo – the disruptor mobile banking app is looking for an extra £20m to continue to grow the business. With over 1.2 million customers claimed, Monzo is making a name for itself in the retail banking sector with its mobile-first app and Current Account product.

Business Book of the Week

Shoe Dog by Phil Knight is the story of Nike from startup to a £100bn+ business, charting the brand from the very beginning. When you have quotes from Warren Buffet and Bill Gates to put on the flyer, it probably doesn’t take much to get on the ‘business’ bestseller list, but this is actually a decent read as well as something to inspire startups today.